I'm Featured on a Podcast!

It always amazes me how from Halloween until the first week of January my life turns upside down. Why? I have two young children, the holidays to sort out, a business and a house to run. Self explanatory really. Anyway, sometime in that window Marian Pierre-Louis contacted me about an interview for her podcast series. I was extremely flattered and of course said yes.

The podcast aired today and is titled The Genealogy Professional, you can find the link here. People often ask me how I got started in genealogy and how does one become a professional genealogist. Those questions are addressed and more in the interview. So if you happen to have some spare time or need an excuse to break away from family activities for a bit, then have a listen. Enjoy!
Posted by Cinamon Collins at 6:00 PM 1 comments

Email ThisBlogThis!Share to TwitterShare to FacebookShare to Pinterest
Labels: The Genealogy Professional

A project I have been working on at the Tennessee State Library and Archives (TSLA) for the past year or more has launched. I am so excited about this, I can barely contain myself. Why? Well since you ask (wink wink), I'll tell you.

The project is the Union Provost Marshal records of two or more civilians for Tennessee, and it has gone online with the link here. Now I do have to say, that it is partially completed and will be updated as more records are scanned and indexed. Right now we are about half way through the microfilm set. These are a wonderful set of records and have possibly become my favorite set to work with.

So you may be wondering, "What are the Union Provost Marshal records, and why should I look at them?" I'll try to explain this as clearly as I can. During the Civil War we were literally a country at war with itself. There were the the Union troops, a recognized and organized Federal army, and the Confederates an army not sanctioned by the Federal government and organized by the South. Between 1861 and 1867 Provost Marshal agencies were set up around the country to handle, among other things, complaints and military issues. They were basically military police during a time of military action in this country. Did your ancestors have a choice to participate in this program? No. Just like you don't have a choice about following the laws and rules of our country, they didn't either. Now, of course some people decide not to pay attention to said laws and rules, but usually they get caught and get in trouble.

When you have a country at war with itself, who do you go to with a complaint? Say your cows were stolen, know somebody who is a spy, you know about illegal activity in the area, or the wood you spent months gathering and chopping for winter has been stolen or confiscated. Who do you think will compensate you for stolen property? The Confederacy? No. In the eyes of the Federal government, they are not a legal organization, and they didn't have the means to compensate you either. You would go to the Union, or in this case a recognized Federal branch of the Union, the Union Provost Marshall.

These records are a treasure trove of information. It is better than any supermarket check out tabloid. Occasionally when indexing the records I come across a file that is just too interesting and juicy to not stop and read. To give you an idea of what topics are covered, I'll list some items I've come across: prison rolls both for men and women, travel pass requests (you couldn't leave the area without one), a list of approved camp followers (somebody had to do laundry, tailor clothes, sell goods to the soldiers), murder investigations, reports of bushwhackers, list of prostitutes, lists of Confederate sympathizers, lists of whole towns taking the oath of allegiance with their signatures, details of setting up a refuge for all of the displaced people (some of which are named), lists of nurses both black and white, names of reliable informers, and so many other wonderful documents that may contain information on your ancestors, their neighbors, or happenings in the area your ancestors lived.

The following is the press release about the project from Tre Hargett, the Tennessee Secretary of State: 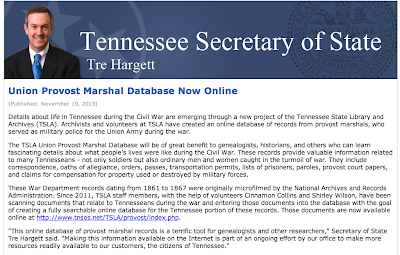 It is a great project and I have been thrilled to be one of the people who have worked on it. I've decided to do a little blog series about some of the records I've come across. In the meantime, go to the site and check it out. I should add that FamilySearch and Missouri State Archives have all of the rolls scanned, just not indexed. So if you have ancestors in other states, you can scroll through their films or if you have Tennessee ancestors then take a look at TSLA's indexed database. Happy searching!
Posted by Cinamon Collins at 7:59 AM 1 comments

Cinamon Collins
Franklin, TN, United States
I've met a lot of really wonderful people through genealogy. The adventures I have in genealogy are sometimes wild, but mostly simple. I often wonder what my ancestors would think of... well just about everything. Thanks for checking in and welcome to my adventures!